Chestnut Homes has thrown its support behind a new trail which celebrates the centenary of the Royal Air Force.

Entitled 100 Voices, the project includes 100 decorated information panels, known as Wings, which tell the stories of people who have served in the RAF since its formation in 1918.

Chestnut Homes, which is based in Langworth near Lincoln, has sponsored one of the wings located on Lincoln High Street.

The housebuilder’s wing was decorated by artist Rosie Ablewhite and tells the story of the Battle of the Hats, an unusual episode between RAF Waddington and RAF Digby where the two squadrons flew over each other’s bases, dropping toilet roll and hats from a great height.

David Newton, Managing Director of Chestnut Homes, said: “As a proud Lincolnshire business, we’re always keen to support any initiative which promotes the RAF and celebrates its rich history within the county.

“When we heard about 100 Voices, we were more than happy to support the project, and having worked with both Lincoln Big and Visit Lincoln on the Baron and Knight trails, we’re confident that 100 Voices will be similarly well received.

“Rosie’s eye-catching design is a fantastic tribute to the RAF and we’re delighted to be sponsoring her wing. I’m sure that all eight trails will prove to be a positive addition to the city and will generate much interest among residents and visitors alike.”

The eight trails have all been named after a type of aircraft and have been placed across Lincoln and the surrounding countryside to appeal to both walkers and cyclists.

Chestnut Homes’ wing is the sixth sculpture in the Hawk Trail - the shortest of the eight routes available and based entirely in the city centre.

The wings will be in place from May 5th until the end of September.

Chestnut Homes is building Kings Manor at the nearby RAF Coningsby base and is set to build a third phase of homes at its LN6 development in Lincoln, off Westbrooke Road. 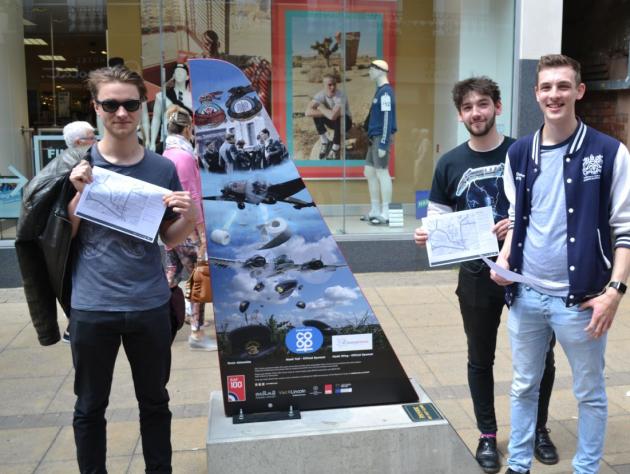